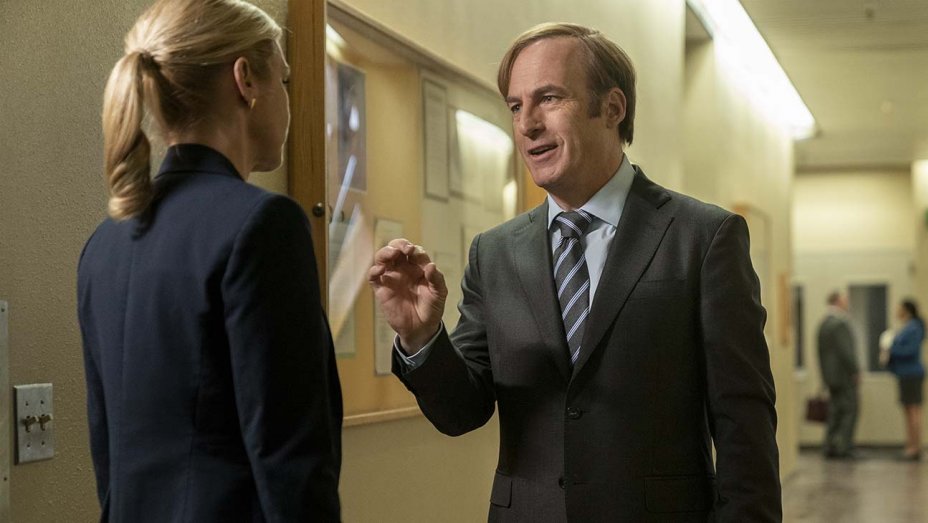 Old friends are finding their way to new personas. That’s Mike and Kim. They’re facing down moral challenges and seeing glimpse of who they might become if their grasp slips. It’s an uncomfortable crawl through the slime. Compromise drains them like a leech.

The exception to this – and the dramatic contrast – is Jimmy McGill (Bob Odenkirk). He’s already evolved. He’s done the deal, sold his soul. He’s out of his cocoon, fully changed, and falling easily into the patter we know and love from Breaking Bad, the series which is increasingly made its presence felt as the timelines converge.

She questions Saul’s transformation. He tells her,

‘I can’t go back to being Jimmy McGill. Jimmy McGill the lawyer is always going to be Chuck’s loser brother. I’m done with that.’ 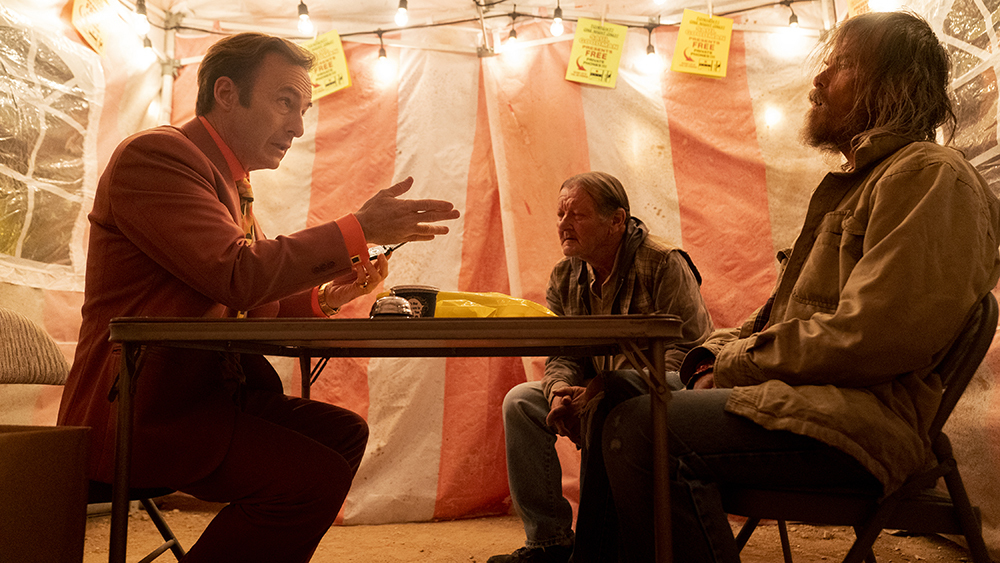 Flash forward – how it all begins, and ends

The season opens with the familiar black and white ‘flash forward’. We see Gene, the genial Cinnabon guy – all moustache, baldness and worrisome demeanour. He’s wondering if he’s been made. He hides out, lays low, scans the police bands till he feels safe again.

Then some schlub of a cab driver is in his face, and pushing for a confession. Say your name. Say it. Saul was a celeb back in Albuquerque, and he just wants Gene, the gloom-laden mall sandwich muncher, to admit it. He’s Saul. The face on the park bench ads.

Jimmy does. In a mumble. The façade cracks. His new life is over. He’s onto the phone to Ed (a farewell to Robert Forster) who says it will cost him twice as much as last time to create a new fiction.

Kim, the do-gooder can’t get rascal Bobby to take the deal. Bobby wants to roll the dice with a jury, even with his heavily pregnant wife sitting right there. A few months behind bars, that’s the DA’s deal, but he’s likely to go down for five years now because he thinks he has a good chance of walking free (he doesn’t). He won’t hear a word of reason. Kim can say nothing that makes him see sense.

Saul, catching her in the courtroom corridor, says, let’s do a bit. Pretend I’m the DA striking down the deal. He plays out the mime, the obstreperous prosecutor, all finger-wagging and stern tones. But Kim’s not sure. She doesn’t play. He says,

‘If this isn’t using our powers for good, what is?’

She shuffles back. Sits there quietly. Bobby and the wifey sense her despair. She feels her ethics under pressure, peeling away like sand in the rain. Given the choice – the big choice – Kim runs with Saul’s fiction. She does the right thing for Bobby even though she knows – she knows – this is a significant capitulation. And she knows, with Saul being Saul, it won’t be the last time she succumbs.

Werner Ziegler, the German engineer, from Gus Fring’s meth lab construction project is no more. Werner slipped away with Fring’s supply and that couldn’t be allowed to go unpunished. Mike Ehrmantraut (Jonathan Banks) – still on the outside, at least in his head – is conflicted about that outcome. He’s like Kim only more so – because he has way, way further to fall.

The German crew is sent back to Europe. With the Salamancas sniffing around, work on the meth lab has to stop (Fring says snooping Lalo S ‘will be dealt with’ so that’ll be fun). Mike’s got nothing to do but Gus says he’ll pay him anyway, just to hang around. Work for nothing – that’s not Mike’s way. He likes the sweat of it, the suffering. I’ll pay you a retainer says Fring (Giancarlo Esposito).

Mike’s already taken a verbal pounding from the Germans over Werner’s fate (‘He was worth 50 of you’). Like Kim, he’s drifting away from his moral core and it’s a painful tear.

He tells Fring, ‘You keep your goddamn retainer.’

Out of the four familiars – Gus, Saul, Kim and Mike – only two are comfortable in their skins. And those are the two guys reconciled to the lure of dirty money – Gus and Saul. Kim and Mike, they still can make a stand, they could haul themselves back to the light. But they know the gulf between who they are and who they think they are. They peer into that dark abyss and find no comfort in character.

Saul to Kim: ‘See this is why this works. I go too far, and you pull me back.

Why it all works

The brilliance of Better Call Saul is the slow, deliberate unpicking of character under pressure. Good people going under, little by little, in painful slo-mo each time convincing themselves the compromise is a one-time deal. Till it’s their whole life.

Read more: What happens in The Stranger, episode one?