What happens in The Stranger, episode one? 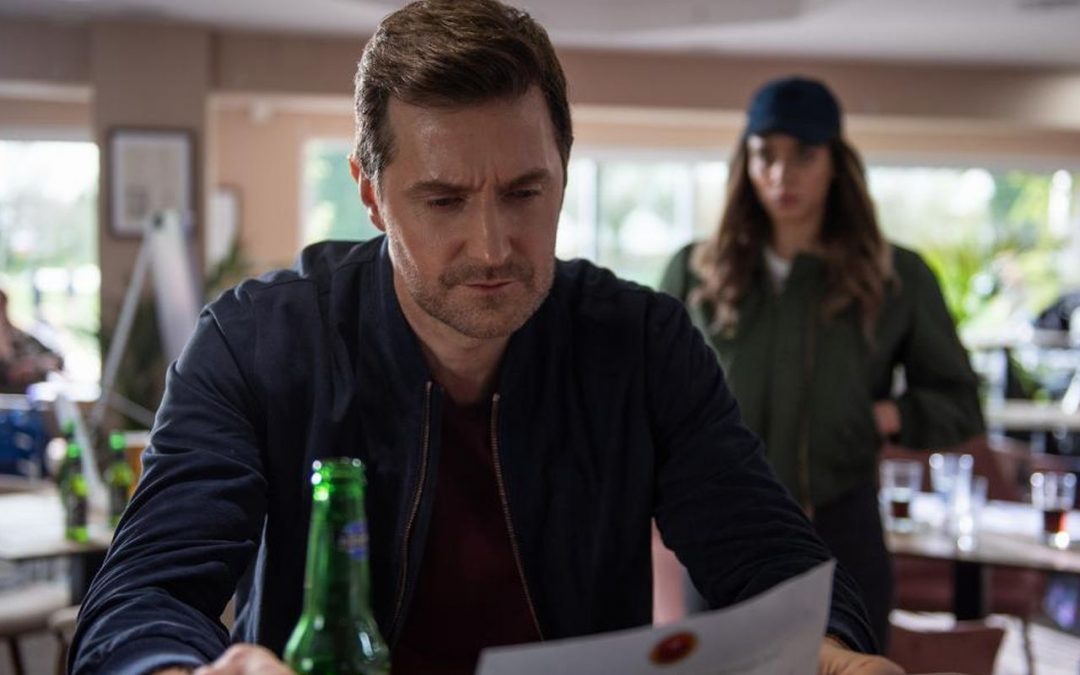 A stranger approaches Adam Price with a disturbing claim about his wife, Corinne. Meanwhile, detectives Johanna and West take on a bizarre case.

What happens in the first episode of The Stranger?

She comes out of nowhere, The Stranger, and pulls Adam Price’s world apart. Adam’s biggest domestic problem, till her appearance, is marshalling his youngest son Ryan into the top team at football. The youngster gets in, no problem. Crisis averted.

But is this just a mirage, this picture of family bliss? Is he just holding it together?

Apparently so. For it to be blown apart, the mirage exposed, it is sufficient to sidle up to Adam at a bar and cast doubt on the truthfulness of his wife. He will reel and founder. He does not dismiss The Stranger with vehemence or outrage but, instead, lets her claim sink into his pores with alarming speed. She pushes at a creaky door already half open.

The Stranger delights on his suddenly shaking foundations, like she is a devil or an imp, drawing strength from others’ misery.

Who is she? ‘Think of me as a Stranger, a stranger who knows,’ she says. Not old and bitter, this teller of nail-sharp truths, but young, attractive, comfortable in her skin and unflinching in her task.

Should he have doubts, the curious Stranger can validate her claims. She gives him clues to chase. She tells him about the company Novelty Funsy (joke name, serious purpose). About a payment his wife, Corinne, made. He follows the payment trail that leads to a supply store that specialises in the elaborate trappings of a fake pregnancy.

He is floored. How can it be that this picture of an ordinary family, mum, dad, two boys – could be built on a lie? And how come this woman in the baseball cap knows this, knows this so well, and tells the tale with such lip-smacking glee. When he looks up, suddenly, poison is everywhere.

Poring over old baby scans, he thinks: Why would Corinne, his loving wife, pursue such a devastating outrage? Remember the words of The Stranger – ‘You didn’t have to stay with her when she told you she was pregnant.’

There it is. The motive, perhaps. Keep the family together with some small deception. Is she capable of such a vast and treacherous thing, he wonders.

He gets his answer soon enough. Doug, a mate, talking about trivial matters – the politics of football team selection – says, ‘When it comes to looking after our kids, we’re all corrupt.’

Is she? Is the missus, Corinne Price – away for a couple of days giving Adam room to brood – is she the grand deceiver? We see her, in flashback, rejoicing at the pregnancy test, mourning its demise, and how real is that? Could she muster the audacity to conjure such fakery, including a false belly under her jim-jams and all those lies?

What else is going on?

Adam confronts Corrine, fresh from her weekend away 32 minutes in (of 50). He wants answers. He bombards her with questions.

Corinne is not wholly outraged, as she should be. She does not deny. She wanders loosely into a strange explanation about a woman she met who seemed to be permanently pregnant and relishing the attention – but that doesn’t explain anything, not really. She is puzzled, her denial unconvincing, her body language shifty.

He is quick to judge. And his verdict is damning – “I’ve stopped trusting you.”

‘There’s more to this’

She is equally quick to deflect. She says, “This isn’t what you think. There’s more to this”, even though there shouldn’t be, and she says, on the back foot, thinking hard, that she will tell him the full story when the time is right. She will meet him for a meal to talk it over after the school awards, which seems like the worst suggestion in the history of domestic confrontations. They are there, in the garden, plenty of time, plenty of space. Why book a table for two at Zizzi (or wherever)?

Doesn’t matter. Corinne has other plans. She doesn’t show for the awards where Adam – standing in for Corinne, picking up her new Teacher of the Year prize – has to sing her praises publicly while feeling sick and hollow.

She has gone now. She leaves him a text message. She needs a few days. She appears wholly guilty but, remember what she said? Back in the confrontation?

Those devastating zingers. “Doesn’t it?” And “Even you”. Smug, smug Adam. What have you done? What have you brought upon yourself?

Meanwhile The Stranger is back. Or has she always been there? She has Heidi in her sights now. Heidi’s tidying up outside her café where she sat with pal Johanna earlier talking about “doing a Thelma and Louise”. Running away. From what? Why now? What does the Stranger know? How far will the ripples reach?

Verdict – what’s weak in The Stranger

Adam is too quick to believe, too quick to act, too quick to lay down his verdict on his wife. Yes, she drives him there, but, surely, there would be a moment to pause and dismiss before going full throttle into the End of Days.

But that is the essence of this fast-moving drama. It is high stakes, bizarre in places, unbelievable in more but heady stuff, where everything you know (from five minutes in their company) will turn out to be a lie. And, in mitigation, Adam is close to that question anyway.

Meanwhile the subplot is sluggish. The decapitated alpaca has an air of zany light relief, underscored by the two coppers who engage in banter that changes the mood but only with a shoehorn.

The dark abyss that surrounds the wholesome family is a staple. It plays on the night-time fears of everyone – that all that they hold dear could shatter in an instant in a world where trust is the only currency worth a damn and as fragile as tissue paper.

What lifts this first episode of The Stranger is, er, The Stranger herself. She has a mythic quality. She is trouble. She is Mr Bean in a bomber jacket. She must be someone, have some story, driven by some perverted desire (or it will be a huge disappointment) but, for now, she has no life other than the sowing of uncomfortable facts into comfortable lives. No-one, it appears, is safe.

Cast (as featured in this review)