What happens to a copper when it becomes too much

The idea of the burnt-out copper is a staple of fiction. But, beyond the cliche, there are real officers dealing with trauma in a very human way.

Police Sergeant Ali Livingstone was driven. He was intent on making his mark, not just occasionally but every day of his working life in the Suffolk force.

This was the UK’s top arresting officer, turning up early for work so he could appraise likely targets. He was nicknamed Robocop by colleagues.

But Robocop sounds cruelly ironic in light of how life turned out for the prolific officer, according to The Times. He was no robot. He was the opposite of that. Despite operating like a machine for his 18 years, the separate traumas he faced accumulated until he could take it no more.

Not the petty stuff but the headline grabbing horrors of his career, like house fires, fatal crashes, murder. He calls these ‘hidden harms’, such as dealing with the raw emotions of bereaved families, the inconsolable hurt and loss he witnessed.

He said that in March last year he suffered a decline in mental health that ‘hit me like a bus’. Finally, with time off failing to make a difference, post-traumatic stress order stole away the very job that had defined him since he was 18.

“Gore is something most cops can deal with, but when you’re dealing with emotional trauma it becomes relentless – being faced with it on a daily basis. I can’t drive anywhere in Ipswich without being constantly reminded of the more serious, sad incidents we deal with. Those memories bleed into your normal life.” 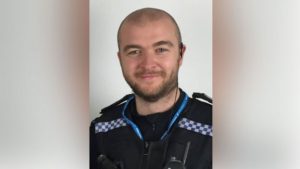 Among that tally is, perhaps, the most notorious, the case of Steve Wright, the Suffolk Strangler who murdered five women. And he worked on the Ipswich nightclub shooting of Jimoh Plunkett, the killer never found to this day.

But his most testing moment was the Christmas Day rescue of Kerri Mills, 36, in 2016.

He was responding to a house fire, crawling up the stairs by torchlight to rescue Mills. An explosion showered Livingston with glass and left him terrified. She had started the fire self had Mills, igniting a duvet. The reason for her actions? Her mother had failed to send her a festive greeting by text.

The strung-out cop who’s seen it all is a hoary regular in crime fiction. He’s shorthand for a world gone wrong, rife with evil. In response, the cracked cop tend to break the rules, break a few skulls, colour beyond the lines and take their troubles home with them to an empty home or a strung-out missus.

Sgt Ali Livingstone’s story gives another slant on the cliché. A very human twist. The fictional detective might turn bitter and cynical but many don’t – or can’t. Sgt Livingstone lived for his career but, in the end, even ‘Robocop’ succumbed to the toll. The cynical copper, out on a limb, turning inwards and to drink is one response to the horror. Sgt Livingstone’s answer is the more human. He literally couldn’t take it any more.

What next for the copper who lives to take down thieves. He’s defined by his job, but he can’t do his job. Can he quell his instinct? Does he crave the thrills even as he dreads their consequences?