How to make the impossible happen, step by step 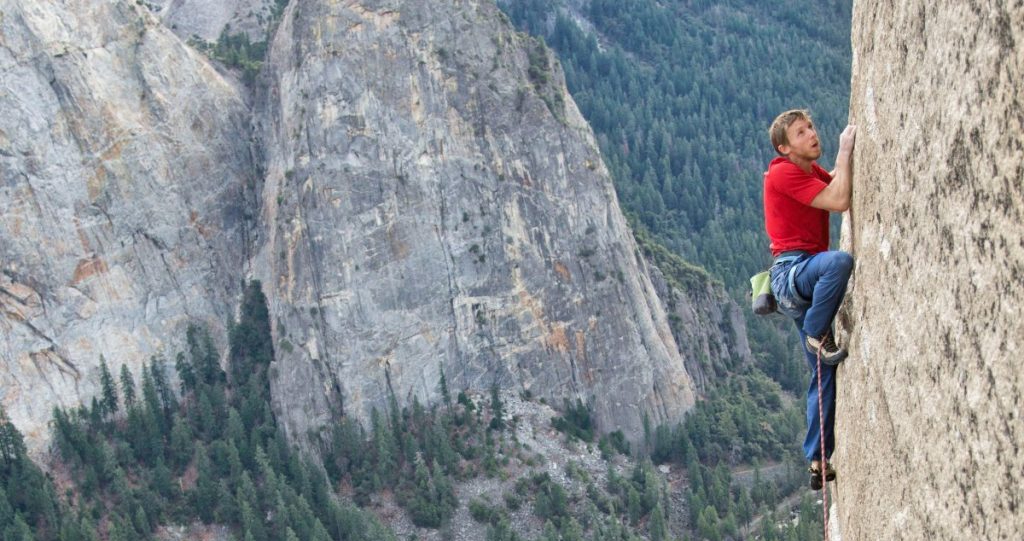 Starting a major project like a novel can be overwhelming at first. Learn from the remarkable Tommy Caldwell about how to conquer the impossible.

I can’t do this. That’s often the first reaction after the initial rush of an idea subsides. You think, I can’t do this – and doubt trips you up before you’ve begun.

You can watch him do it – on Netflix in fact – and you’ll still think it’s impossible.

Tommy is halfway up the 3,000ft Dawn Wall of El Capitan. It’s sheer face of rock. Smooth as the finest silk and as hard as life can be. There is nothing there to grip.

Watching, you ask, time and again, how can a body be held, hundreds of feet in the air by the slenderest of barely visible indentations?

On the Dawn Wall

Let’s catch up with him.

He’s with Kevin Jorgeson. They are tackling a climb that has more world-class free climbing challenges than all the other El Capitan climbs put together – and they’re all impossible too. It’s called the Dawn Wall because that’s where the sun hits first in Yosemite, a mirror-smooth piece of granite that is beautiful and formidable and – for our purposes – unconquerable.

Look at it. It begs you to admire its majesty if it cares at all about your thoughts and feelings. Which it does not. It truly does not.

Climbing the Dawn Wall is impossible. It doesn’t become less impossible because Tommy and Kevin are doing it. They hang there on ledges held by pegs, and then, each day, they set out and do few hundred feet more of impossible.

And if you’re watching the awe-inspiring documentary The Dawn Wall and these unprepossessing guys in T-shirts lull you think into thinking it’s, well, it’s not easy but it must be do-able, then ask them about Pitch 15.

Pitch 15 is an atrocious lateral traverse across that links two upward stretches along a strata of rock. Tommy’s been plotting this route for six years. He’s tried out individual sections. He and Kevin have been rappelling down from the top to look for razor blades of rock against which they can jam their calloused and bleeding fingers.

But they’ve never done Pitch 15. Never. In all those years of practice, Pitch 15 has defeated them. But they have to do it now, with the eyes of the world on them.

They try, they fail. They try they fail. For days. Then Tommy, a climber savant, cracks it just the once and that’s enough. But Kevin is left behind. He tries, he falls, swinging like a pendulum. Time after time. He tries, he falls. He takes a break for an hour on the precarious artificial ledge and tries again. For days this goes on.

‘You fall 800 times, and you wonder how could you continue to beat your head against this wall,’ he says.

Tommy moves on. He’s heading up the Dawn Wall to the top. Below, Kevin has had a thought as he waits for his stunted fingers to heal. It’s never going to happen for him. He decides he’ll support Tommy instead.

Because this is Tommy’s obsession. He’s been plotting this forever.

A climbing legend in the doc says, ‘It’s a 3,000ft wall and comes down to millimetres of skin contact.’

So think what’s like for Tommy with just a nub of a forefinger. The top section was sawn off in an accident. It’s like a footballer losing a foot. The surgeon said, you’ll have to find another job Tommy and Tommy said – forget that. Or words to that effect. Because Tommy doesn’t give up.

Tommy Caldwell and his remarkable escape

Tommy is human though. Don’t get the idea the guy is a robot. He has contemplated giving up. He was married to Beth, another climber, and they were the Posh and Becks of the climbing world, working together, tackling the challenges and hogging the front pages of climbing magazines. Beth and Tommy. Tommy and Beth.

They’d been together since they were kids. They bonded when they were taken hostage by militia rebels in Kyrgzstan and forced to tramp the desert without food for six days.

No, really. That happened.

But they didn’t just flee their captors harmlessly in the middle of the night. What Tommy did was throw his captor off a cliff to his death. That’s what Tommy does. He does what’s necessary.

When they separated Tommy wondered whether he should try climbing without ropes. See what would happen. He didn’t care much either way.

Beyond that black depression, he found another way of tackling the pain. He found the ultimate distraction. He set about plotting his assault on the Dawn Wall. He traced little routes on this blank canvas of El Capitan and then, back at home, he would try to join those routes into one continual climb.

Tommy Caldwell and the unbreakable bond

He recruited Kevin Jorgeson. Kevin was a boulder climber. Which, to you and me, meant he had the physicality and the technique, but he’d never been much above 30ft. Certainly not 3,000ft, hanging on the rockface and sleeping in sub-zero temperatures while calls came in from the New York Times and NBC asking them how it was going up there, fellers.

Over the years of practice, they formed a bond. That bond wouldn’t break. So, Tommy, near the summit, stopped looking up and started looking down.

He looked down from the Wino Tower, a single man-sized rock ledge on the sheer face. It was a milestone, a signal was nearly at the top. And he should have been exultant but instead he felt hollow. Kevin wasn’t there. So, he went back to Kevin. It was back to the two of them and a wall of rock. And he said, I’m staying here until you do Pitch 15.

We do it together, or perhaps not at all.

Between a rock and a hard place

Seven days in and Kevin completed Pitch 15 on the Dawn Wall. It was an epic accomplishment in itself. A mini El Capitan. It was a transcendent moment for both. Kevin screamed with relief. He even made the dyno jump – an impossible lateral spider leap – that even the legendary Tommy Caldwell had avoided.

And when they reached the top, they reached it together. There was champagne and tears, elation and a weird melancholy because there were no more worlds left to conquer

It was impossible. Everybody said so. But for years, thankless years, they told each other – we just might do this. And they did.

And that’s what four-fingered Tommy has to say about your project, your Dawn Wall.

Between a rock and a hard place, there’s always a way forward. The next ridge might seem slender and tenuous, but you’ll be amazed by where it can take you.

Don’t worry. It will support your weight; it will take your higher.

Read more: What is the boiling frog and why is it ruining my life?